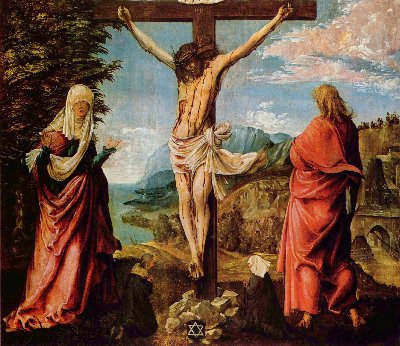 The image of the crucifixion has come down through the centuries: Christ's arms outstretched as if beseeching, his legs straight, his hands and feet nailed to the cross.

But this weekend in Britain in the final part of a TV drama called The Passion, Jesus will be shown in a different position – his arms above his head, nails through his forearms, his knees bent in a fetal position. The cross is T-, not t-, shaped.

Even before it airs, it's being criticized. Several theologians say it's offensive to deliberately ignore the iconic depiction venerated by millions of Christians, Catholics in particular. Furthermore, to suggest Christ's nails went through his forearms, not his hands, contradicts the New Testament's Book of John, in which Jesus says to his disciple Thomas: "Put your finger here; see my hands."

Tampering with the sacrosanct image wasn't done gratuitously, counters the BBC. The position was partly based on a crucified skeleton of a man in his 20s found near Jerusalem in 1968, dating from the time of Christ. It's the only archeological find of its kind because victims were usually left to decay on the cross.

"There were a variety of positions," says John Marshall, a University of Toronto religion professor. "Experiments with dead bodies have found that the hands are not strong enough to take the nails, the forearms are." 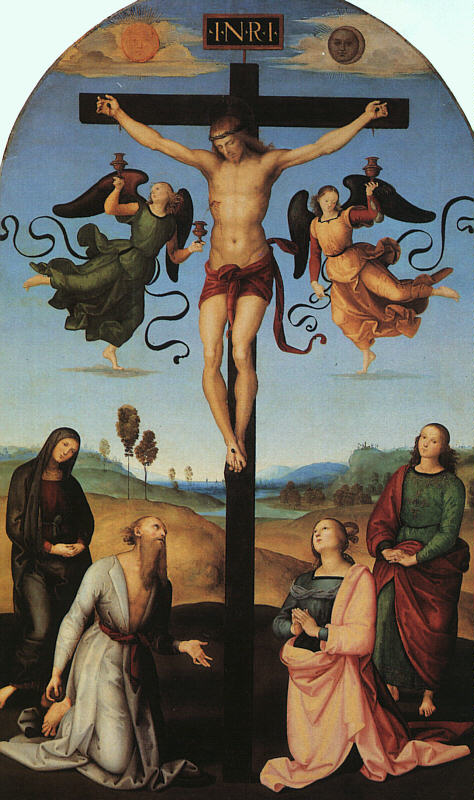 The ancient Romans were without doubt the world's leading practitioners of this excruciating brand of execution.

But they didn't invent it. And they haven't been the last to use it. Crucifixion exists even today.

But it began in antiquity. The Islamic Qur'an mentions the practice being used in Egypt in the time of Moses and some archeologists say it, or a similar form of impalement, was used by the ancient pharoahs.

It first appears in the historical record in 519 BC, with "Darius I, king of Persia, crucified 3,000 political opponents in Babylon." In the fourth century BC, during Alexander the Great's occupation of what is now Afghanistan, rebels were rounded up and crucified.

Rome used it at home both as punishment and deterrent for slaves and low-born non-citizens deemed guilty of everything from highway robbery and false testimony to grave-robbing and rebellion. Considered a shameful way to die, Roman citizens could be sentenced to nailing only for high treason.

In 71 BC, a slave rebellion led by the gladiator Spartacus was finally ended when 6,000 prisoners were crucified on a single day along a 27-kilometre stretch of road into Rome. The screams of the victims were said to have haunted the Appian Way for a century.

It was a favoured method of dispatching the earliest followers of Christ. Mocking graffiti dating to about 200 AD found on a wall on Rome's Palatine hill show a man worshipping a crucified ass, clearly meant to represent Jesus. Roman historians recorded that the emperor Nero ordered that Christians be crucified, and at night their bodies set on fire to provide illumination – human torches for the dark Roman night.

When the Romans besieged Jerusalem in 70 AD, 500 people a day were crucified, according to the Jewish historian Josephus: "There was not enough room for the crosses and not enough crosses for the bodies."

The victims were left to decay on the cross, the remains of their bodies tossed into garbage pits.

The Romans employed several forms, depending on the sadistic ingenuity of those carrying out the execution and the time needed for the spectacle to have maximum effect on passers-by.

Sometimes, victims were attached to a cross only with ropes. A crossbeam, to which the victim's arms were already bound, was simply fastened to the vertical beam, the feet then bound to the stake with knotted rope.

If the person was to be nailed, he was laid on the ground with his shoulders on the crossbeam, his arms or hands held out and nailed to the two ends. It was then raised and fixed on top of the vertical beam. The victim's feet were nailed down either one on top of the other, or on either side of the plank.

Sometimes the cross had a small seat attached half-way down the vertical beam or a foot-rest at the bottom – not to ease the process, but to prolong it. Taking weight off in this manner meant the anguish of dying lasted two to three days.

The quickest, most efficient form was to suspend the person's arms directly over his head. If the feet were nailed or tied down, suffocation would occur in less than an hour because he couldn't raise himself up to breathe.

Only after emperor Constantine, a Christian convert, prohibited crucifixion in 337 AD did the practice end, at least in the Roman empire. But it would resurface in other times, other places.

In 1066, in Grenada, Spain, a Muslim mob crucified a Jewish official and killed most of the Jewish population. In 1597, 26 Christians were nailed to crosses at Nagasaki, Japan. But crucifixion isn't just the preserve of history: After World War II, eyewitness accounts by prisoners-of-war in Dachau reported inmates were crucified there.

Torture was prohibited under international law in 1948. But neither torture in general, nor unbelievably, crucifixion in particular, has been eradicated.

In the 1970s, it was used in Cambodia by Pol Pot's Khmer Rouge. Since 2000, Yemen practices the "non-lethal" crucifixion of criminals, though it's believed to be reserved for those condemned to death.

In 2001, Hafiz Sadiqulla Hassani, a former Afghan policeman during the repressive rule of the Taliban, told British reporter Christina Lamb his unit was ordered to torture and crucify those unwilling to submit to the Taliban's ways.

"We always tried to do different things. We would put some of them standing on their heads to sleep, hang others upside down with their legs tied together. We would stretch the arms out of others and nail them to posts like crucifixions."

On and on it goes: In 2002, Al Jazeera reported the crucifixion in Sudan of 32 Christian priests and other males, some in their teens. In 2003, Iran adopted a law entitled, "Implementation regulations for sentences of retribution, stoning, killings, crucifixion, execution and lashing."

That same year, an Iraqi named Manadel al-Jamadi was tortured to death in Baghdad's notorious Abu Ghraib prison. A CIA interrogator ordered that he be stripped, hooded and hung from bars above his shoulders in a manner known as "Palestinian hanging," a form of crucifixion allegedly used by the Israelis.

In this case, it was apparently intended as a torture technique rather than a deliberate execution. A distinction without a difference. Over 45 agonizing minutes, Al-Jamadi suffocated to death.

"It may be hard for people to believe," says Aubrey Harris of Amnesty International Canada, "but yes, crucifixion still exists in several parts of the world."

The Crucifixion in Popular Culture

The cover art of Tupac Shakur's album The Don Killuminati: The 7 Day Theory features an image of Tupac being crucified on a cross. However, he states that the image is not a mockery of Christ, but how he's being "crucified" by the media.

In the music video for "Hate Me Now" by Nas featuring Puff Daddy, Nas is seen being crucified.

One of Sevendust's songs in their album Seasons is called Crucified. The only reference to crucifixion in the song is the lyrics "I've been crucified, and noone seems to care" and "The first time I knew you lied, I ended up crucified" It is possible that the latter lyric could refer to Judas "selling out" Christ.

In the music video for "Until It Sleeps" by Metallica, Kirk Hammett was briefly shown crucified in the video.

Carnehan in The Man Who Would Be King and Joe Harmon in A Town Like Alice both survive crucifixion.

"Big Bill Shelley" (played by David Carradine) in the movie Boxcar Bertha, was crucified on the side of a train freight car near the end of the movie.

Crucifixion was featured in the comedy film Monty Python's Life of Brian (1979). In one of the more memorable scenes at the end of the film, the viewer is reminded to "always look on the bright side of life" by singers hanging from crosses.

Characters played by Arnold Schwarzenegger are crucified both in Conan the Barbarian (1982) and in End of Days (1999). Also, in the latter movie a priest is crucified to the ceiling of a hospital room.

The movie Cyborg has multiple scenes of crucifixion.

The movie Men Behind the Sun features mass crucifixion in a scene in which innocent victims are used for various cruel experiments.

The movie Spartacus depicts mass crucifixions along the Appian Way.

The opening scene of the movie Exorcist: The Beginning features a crowd of upside down-crucifixions, mirroring the crucifixion of Saint Peter.

In 1991, Army of Lovers released a single describing voluntary crucifixions as expressions of religious devotion in the Philippines. "Crucified" performed well on the DMR club charts, but controversial lyrics ("I'm crucified, crucified like my Savior; saint-like behavior, a lifetime I pray") precluded widespread radio play.

According to urban legends,[23] a Japanese department store confused Western imagery and displayed a crucified Santa Claus as part of its Christmas decorations.

Robert Cenedella actually painted a crucified Santa Claus as a protest against Christmas commercialization, displayed in the window of New York's Art Students League in December 1997.

The song "The Ballad of John and Yoko" was banned by several US radio stations, due to Lennon's use of the word "Christ" and the phrase "They're gonna crucify me" in the lyric. In fact, the song's working title was "The Ballad of John and Yoko (They're Going to Crucify Me)". Tori Amos's early hit single "Crucify" was also dropped in numerous locations because of its imagery.[citation needed]

Multiple Marilyn Manson videos such as "I Don't Like The Drugs But The Drugs Like Me" and "Coma White" feature crucifixion imagery, often oddly staged in surreal modern or near modern day settings.

Singer Madonna opened her concerts during her 2006 tour with a mock crucifixion, complete with a Crown of Thorns. This caused considerable controversy, especially when she did so at a concert near Vatican City in 2006. [10]

Norwegian black metal band Gorgoroth had several people on stage affixed to crosses to give the appearance of crucifixion at a now infamous concert in Krakow, and repeated this act in the music video for 'Carving a Giant'.

In the 2006 movie, The Nativity Story, there is a brief scene in which several men are crucified.

The music video for the Nine Inch Nails hit single "Closer" features a controversial scene in which a live monkey is tied to a cross in a mock crucifixion.

The FPS game Unreal features crucified Nalis multiple times. However, there is a twist, as Nalis have four arms, so the crosses have two crosspieces in an X-shape.